Books Every Student Should Read – Mindset: The New Psychology of Success 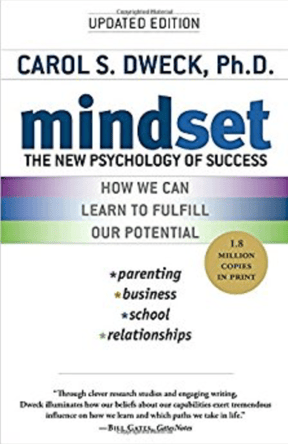 As many readers of this blog know, MyGuru tries to be much more than a place where parents and students can look for a private tutor. We are trying to build a community of parents, students, tutors, and other experts where ideas about how to be healthier, more productive, and academically successful are exchanged.

With that in mind, in this article I’ll discuss a book which offers powerful ideas to help any student be more successful inside and outside of the classroom: Mindset: The New Psychology of Success by Carol Dweck. She helped found a company on the back of her research called “Mindset Works.” This is part of a new series we are launching called “Books Every Student Should Read.”

Each book we discuss will be reviewed in the context of a framework we’ve developed called the Academic Performance Pyramid, which says that for any given level of effort, your performance is determined by your: 1. overall health and wellness, 2. Mindset and character, 3. strategies for reaching goals, 4. techniques used when studying and learning new things, and 5. organizational skills. Dweck’s mindset is a cornerstone of the “Mindset” portion of our framework.

Mindset: The New Psychology of Success by Carol Dweck

Dr. Dweck introduces the reader to a powerful concept called the “growth mindset.”

The Transforming Education blog has an excellent infographic on what a growth mindset is and why it matters.

In study after study, Dweck has shown that when students either naturally tend to have a growth mindset or receive growth mindset training such that they are exposed to the differences between the two and are provided with ways in which they can cultivate a growth mindset instead of a fixed one, they perform better on tests and earn better grades.

Why would this be? Why is a growth mindset so important for students to understand?

There are a few reasons.

First, most IQ researchers believe personality and intelligence have both some fixed and some “malleable” or “changeable” dimensions to them. For example, IQ tests try to measure your brain’s processing speed (to over simplify the matter quite a bit). These tests are supposed to be measuring your underlying, genetic ability to acquire knowledge, not the amount of knowledge you currently have from studying and learning.

Some studies however, show that with focused practice and/or increased education, IQ scores can drift upwards. IQ scores can be improved, a little bit. So that’s one reason the growth mindset leads to better performance. Some things, like underlying IQ, which seem fixed and which the average person believes is truly fixed, really aren’t, so with practice, performance improves.

But in fact, the real “secret” to understanding the power of the growth mindset, in my view, is that the concept of “intelligence” is a very complicated and complex one, and many students believe that performance in various subjects in school has a LOT to do with what you might call “genetically determined IQ” when in fact, it has just a little to do with “IQ” and a LOT to do with how much you practice and how much effort you put in.

Students would be better served to ignore the concept of “IQ,” and instead focus on a more broadly defined notion of “intelligence” that perhaps acknowledges the existence of IQ scores on some level, but focuses FAR more on how focused practice and hard work help you acquire knowledge and build the skills that, in effect, grow your intelligence steadily over time.

Let me try to be clearer and summarize the main theme of Dr. Dweck’s work in the context of a reasonably complex mathematics class like first semester calculus.

This is the type of class that seems to many students like it might be very difficult. And yes, it’s a class you might not take until college, depending on your experience with math. But in fact, doing math is much more like a skill you can build through practice than some sort of IQ test. So sure, some percentage of students will just struggle with comprehending the concepts in calculus. But the successful student in first semester calculus is typically successful because they pay attention, work hard, and practice (i.e., do their homework). I would argue that almost all students who find themselves sitting in a first semester calculus course HAVE THE REQUIRED ABILITY to earn an A or a B, IF they put in the work.

The student with a “fixed” mindset though, sort of flips that narrative. They believe their math skill is a fixed trait. They’ll either understand the material or they won’t.  If you think this way, you really have very limited incentive to pay much attention and work hard. You may be forced to put in the work because the teacher grades homework or your parents have instilled in you a good work ethic, but in your mind, you feel a sense of futility because you just don’t think that you have much control over your performance.

As soon as you start thinking this way, you of course are less likely to pay attention and put in the work. This naturally leads to poor performance, which reinforces the idea that you just aren’t very good at math. With a growth mindset, the whole story works in the opposite direction. You assume everyone, including you, has the intelligence to get an A in calculus, they just have to practice and build their math skills. Since you feel in control, you are MUCH more likely to decide to put in that work and get to a good outcome in the class.

The implication is that you are in full control of your academic future, and you could probably pursue academic areas that seem almost impossible.

This could mean that a person with an average or slightly above average IQ, if he or she decided to, could become a PhD in Physics with the right amount of focused practice and effort.  Most people can become experts in almost any academic area if they decide that’s what they’d like to pursue. Now, can anyone win a Nobel prize in physics or earn a tenure position at Harvard teaching physics? IQ may play a role in allowing you to reach the absolute pinnacle of some professions. But most of the time, focused practice and hard work can get you much farther than many students realize.

How do you build a growth mindset?

Across the many articles that have been written about the growth mindset and within the Mindset: The New Psychology of Success, I see two basic strategies for cultivating growth mindsets instead of fixed ones.

First, take the time to explain to yourself and others about the difference between a fixed and growth mindset, and about the complexity behind the notion of “intelligence” or being “smart.”  Imagine two people, Bill and Frank. They are both 30 years old. Bill dropped out of college and works in the family business, and has an IQ score that is 15% higher than Frank’s. But Frank has read 25 times more books, and holds a PhD in Political Science and an undergraduate degree in Economics. He’s written several of his own books. He’s spent thousands of hours in classrooms listening to lectures and writing papers about a variety of topics. Who is “smarter?”

Second, when you are thinking about your own performance or that of your children, praise effort, not results. That A in the math class was a result of “how hard you worked and how much you practiced” and not “how smart you are at math.”