How to Build the Right Skills Deliberately with Practice

“It’s not that I’m so smart.  I just stick with the questions longer.” - Albert Einstein

Perhaps the most important idea in our book "7 Rules of Academic Performance", and in the research performed on performance in the last decade, is that natural talent matters far less than the average person thinks it matters. What matters is the amount and quality of practice that you do.

Some people have a fixed mindset, and tend to feel as if they must deal with a level of intelligence or a suite of personality traits which are unalterable.  They tend to avoid difficult activities in which they might fail, which leads to lower levels of learning over time, creating a self-fulfilling prophecy in which they really do, for example, have worse than average math skills.  But, it’s not because they “just aren’t good at math” (…or English, or Chemistry, or Chess) it’s because they haven’t been practicing and pushing themselves to improve their skills over the course of many years.   People with a growth mindset believe the opposite.  They believe – they know- that with the right amount and type of practice in any given area, they will improve and can become highly skilled.  So they enjoy the learning process, and come to even embrace mistakes, because they know that it’s through mistakes that they will learn new things.

So, for example, he looked at amateur vs. expert pianists.  Playing the piano is certainly an area where, while we’ve probably all agree hard work matters, we’d also say things like “she’s such a natural” or “she has so much potential” or “she’s so talented.”  But if you squint, you’ll notice that, on average, by age 13, an expert pianist has practiced for almost 3,000 hours, while an amateur pianist has practiced for ~750 hours.  It’s an obvious point, but 3,000 hours vs. 750 hours of practice is going to make you a much better pianist.  What isn’t obvious is that, if you think about it, that suggests that maybe calling someone a “natural” at age 31 doesn’t make that much sense – at all.  Instead, they should be praised for their focused investment of time and effort to build their skill. 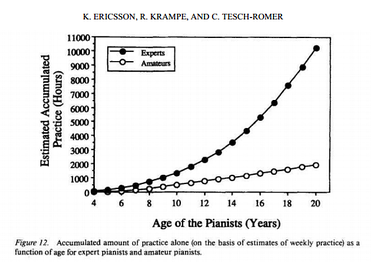 However, hard work (i.e., a large amount of practice) is far from enough.  What’s required is a high quantity and quality of practice to build skill.  In fact, a little deliberate practice might be better than a lot of unfocused but well intentioned hard work.

But, before we address who to practice or study deliberately, let’s review this rule again “Build the right skills deliberately.”  The body of research on deliberate practice shows that it works almost anywhere, including skills that seem to be highly related to natural ability.  But if we’re talking about academic performance, what skills are we talking about?  We’re talking about all of the skills you need to do well in school, some of the most important of which aren’t always front and center in your mind, but which might actually be what is really hurting your ability to excel.  Here are the big buckets:

Concentration, focus, memory – ability to sit in class, focus on the lesson, and remember what you’re learned

Interpersonal and communication skills – ability to confidently and clearly ask questions in class, work well with others, communicate your question or point in a small group, etc.

Leadership – even as a high school student, learning to take a leadership role on a project, in a small group, or in a larger club or activity, is important

So, how do you practice any of these skills deliberately?

If you are building skills deliberately, you are:

If you are practicing deliberately, you are fully engaged, focused on learning, thinking and analyzing how to perform specific skills.  So, as you go about participating in a classroom discussion, completing your homework, preparing for a standardized test, or any other academic pursuit, the key is to keep the above principles in mind and try always to apply them.  If you are going to spend 60 minutes studying, you might as well get the most out of those 60 minutes by following deliberate practice principles.   One absolute key is to learn to embrace failure and difficulty, recognizing that struggling is the key to learning and skill development

How does deliberate practice build skill?

Interestingly, the research on deliberate practice spans a wide range of disciplines, from education to psychology to music to athletic performance theory.  It extends all the way into neurology and brain science, where researchers have identified why deliberate practice works at the molecular level.  We won’t go into many details at all here, but essentially high quality, deliberate practice fires up the neurons in your brain, creating new connections and building a substance called Myelin in the brain, and so we can literally scan brains before and after deliberate practice and measure the myelin that’s created.

The person to originally uncover the power of deliberate practice, and who discovered the 10,000 hour rule, was a researcher named Anders Ericsson.  His book, The Road to Excellence: The Acquisition of Expert Performance in the Arts and Sciences, Sports, and Games, is a work of academic research, upon which several highly popular books aimed at a general audience, are based.  These books include:

There are also two interesting books that focus less on the theory behind deliberate practice, and more on providing practical tips for being more deliberate as you go about building skills:

Daniel Coyle, author of the Talent Code, also maintains an interesting, highly engaging blog which you can read here.