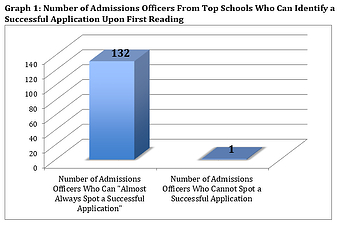 This is a guest post by Joel Butterly, CEO of inGenius prep.

You’ve probably heard that the admissions process is a crapshoot. I’ve heard it countless times: college, business school, law school, and medical school – all of them crapshoots. I have had friends, parents, and even students who try to convince me that some admissions offices simply discard half of the applications they receive.

These individuals believe that behind the opaque doors of admissions offices, the fate of applicants is determined by random and spastic decision-making. According to them, attempts to predict or improve an applicant’s chances of admission are futile. Prospective applicants should just get good grades, score high on their standardized tests – SAT/ACT, GMAT, LSAT, MCAT, etc. – and hope for the best. Maybe they should just abandon hope altogether.

Luckily, these people are dead wrong.

Why the Adage is Wrong:

There is nothing random about admissions officers’ decisions. In fact, their continued employment hinges on the quality and predictability of these decisions. If they were random, then schools would likely have a simple computer program that replaced the entire admissions office.

Instead, schools spend considerable sums of money competing over and hiring the best admissions officers in the country. Indeed, the salaries of the highest paid Directors of Admission – those in top 10th percentile – are almost three times greater than the salaries of their counterparts in the bottom 10th percentile. Seems pretty wasteful if these people are making arbitrary decisions, doesn’t it?

In reality, the old “crapshoot” adage only demonstrates one thing: these people aren’t paying enough attention. They observe that admissions decisions are not determined by a simple, immutable formula. From this, they assume (incorrectly) that results cannot be predicted, and that an applicant’s chances cannot really be improved.

To the contrary, a poll of admissions officers from the top colleges and professional schools revealed that nearly 100% claim they can “almost always spot a successful application as soon as [they] read it.” The results of this poll, conducted in the winter and spring of 2013, are displayed in Graph 1.

If we assume that these admissions officers were telling the truth, this graph suggests that the factors that determine an application’s success are both identifiable and predictable.

Moreover, if these factors can be easily identified on an application, then applicants should approach their applications strategically, and with the utmost care.

But how do we know what these factors are? How do they change between different schools?

Since its inception, the inGenius prep team has been working around the clock to compile a one-of-a-kind database from tens of thousands of applications to the most competitive schools.

Unlike your run-of-the-mill “admissions calculator” that only accounts for GPA and test scores, our database includes hundreds of variables ranging from nationality and ethnicity, to extracurricular activities and internships; from test scores to personal statement topics; from GPA and class rank to professional job experience. You name it, and we’re collecting data on it.

Using this data, our statisticians can analyze and compare successful and unsuccessful applications. This analysis has yielded some very interesting insights. For example:

Your chances of being accepted to a top-ranked law school (particularly Harvard, Yale, and Stanford) increases considerably if you write an honors or senior thesis during college. In fact, academic work beyond regular classwork is a strong predictor of an applicant’s chances of admission for nearly every top-14 law school.

These are just a few small examples of what insights this data can produce. Using this data, we can determine what an applicant’s chances of success are for a particular school based on hundreds of variables.

More importantly, this data can give applicants objective feedback on how to best improve their chances of admission.

You can check our blog for the latest updates from our statisticians.

InGenius is partnering with MyGuru on our new book: 99th Percentile - A Roadmap for Achieving Drastic Performance Improvement on Standardized Tests.