Fuel Your Mind Through Exercise, Nutrition and Sleep 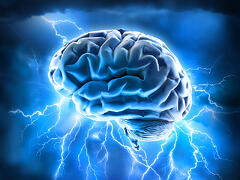 It turns out that there’s lots of documented scientific evidence that the more you exercise, the better you eat, and the more you sleep (within reason), the better your brain works (i.e., you can reason more clearly, recall information faster, solve problems faster, etc.). It naturally follows that exercise, nutrition,  and sleep are critically important, though perhaps indirect, elements of improving children's academic performance.

On the one hand, this may seem a little obvious. But one of the more interesting pieces of advice about critical thinking and problem solving ever given to me was that the best insights are those that seem really, really obvious once they are realized.  If you really didn’t know it before for sure, but now you do with certainty, you’ve realized something important.  Still, I find that sometimes an idea seems so intuitively obvious that it isn’t interesting enough to grab most people’s attention, or perhaps because it’s obvious, it just doesn’t seem like it can be that important.

I am convinced that this rule falls squarely into this “seems obvious, probably don’t need to pay that much attention to it” category.  But, it’s an important rule with surprising supporting evidence that far too many people simply ignore.

We won’t go into extended detail on the science behind this rule here, but the science is covered in enjoyable detail in Brain Rules: 12 Principles for Surviving and Thriving at Work, Home, and School by John Medina.

But, a quick summary of the science would be that we evolved over thousands of years in an environment that involved constant movement.  We were literally walking 10-20 miles per day for thousands of years.  So, part of the story is that the brain has evolved to function more efficiently when we are in motion.  When we are in motion, more blood and oxygen gets to the brain, and it operates better.

In his book, Medina summarizes the issue by saying that current research suggests that “exercisers outperform couch potatoes in tests that measure long-term memory, reasoning, attention, and problem solving skill.  The same is true of fluid intelligence tasks, which test the ability to reason quickly, think abstractly, and improve off previously learned material in order to solve a new problem.”

The story with nutrition is similar.  Eating right and getting the right type and number of nutrients into your body is literally what gives your brain, heart, and muscles the fuel to perform.

Sleep is a more nuanced story, and perhaps more important.  Whereas exercise, for example, can be thought of as a bit of an indirect link to cognitive performance (i.e., if you are a regular exerciser, your gain a cognitive benefit, and that benefit doesn’t go away if you skip 2-3 days of activity), sleep can be much more direct.  If you get 2 hours of sleep, you will have trouble thinking clearly the next day. Clearly, if you have trouble sleeping you should seek tips and strategies for sleeping better.

When you do not get enough sleep, it can and will directly impact your ability to learn difficult (or not so difficult), recall information, and problem solve.  Outside of school, it can impact your athletic, musical, or interpersonal skills.  The United States center for Disease Control and Prevention considers sleep health a public health epidemic. The CDC web-site features some astounding statistics on sleep that have obvious impacts on your ability to learn and perform well in school and at work.

~40% of adults of 20 years of age have noticed themselves being unable to concentrate or remember information because they are tired, according to information on sleep compiled by the CDC.

A 2006 national sleep foundation study found that 75% of adolescents between 6th and 12thgrade were getting insufficient (<8 hours) or borderline (8-9 hours) of sleep each night.

Let’s look at one final chart on sleep.  In the book by John Medina, he references a study that has been performed many times in which a very tricky set of mathematics problem is given to a group of students, and they are prepped in methods they can use to solve them.  They aren’t told that there’s a potentially very easy “shortcut” way to do the problems, which is discoverable once you dive in and try to solve them.  They are told to take 12 hours to decompress and figure it out.  They were necessarily working on the problem for 12 hours, just re-setting, and thinking through options for how to solve it before they really dove back in.  One group was given those 12 hours during the day (i.e., 7AM to 7PM) while the other was given those 12 hours over night (i.e., 7PM to 7AM.  The below chart shows show the percentage of each group that was able to find the “shortcut” solution to the problems. 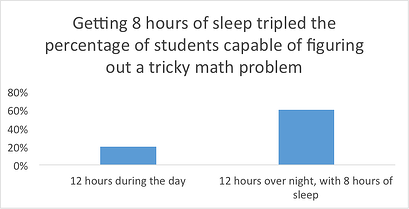 In sum, to perform at a high level in school, at work, you should be sure to exercise, eat right, and get enough sleep.

How to learn more –

Again, I highly recommend John Medina’s book Brain Rules: 12 Principles for Surviving and Thriving at Work, Home, and School to learn more about the ideas in this chapter.  The CDC web-site and National Sleep Foundation offer ideas and strategies for getting better sleep, and there is a growing body of research on the link between academic performance and exercise.