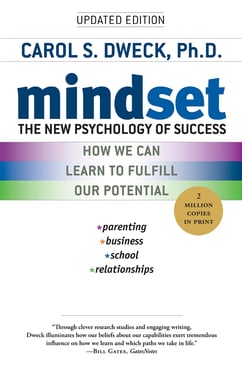 We consider Mindset: The New Psychology of Success,  by Carol Dweck (who is the Lewis and Virginia Eaton Professor of Psychology at Stanford University) a foundational book for both parents and students. It convincingly explains what holds many people back from achieving success in school and in other aspects of their lives: their mindset.  It does this by walking through a few key points.

While IQ is a real factor in learning, it’s much, much less important in explaining why some do well in school and on tests and others don’t. Also, people don’t really have traits that predetermine what subjects they can or cannot excel at.  When someone says “I’ve just never been good at math” or  “I’m just not a math person” they are making a range of incorrect assumptions about whether they can be good at math (they almost certainly can) and what it takes to be good at math (hard work and perhaps more importantly, the right type of practice).

What does seem to determine whether your success academically is your mindset. Dweck shows that fundamentally, there are two mindsets: fixed and growth. Even though research suggests they don’t really exist, folks with a fixed mindset believe in fixed traits that determine what you are good at or what type of personality you'll always have. So, for example, someone with a fixed mindset might believe they can’t really ever do that well in a math class, because they just aren’t good at math. But if, with your fixed mindset, you believe you can’t be good at math or it will always be a struggle, you are then far less motivated to listen during class and try hard, believing instead that others “just get it” without having to work. You don’t want to waste your time. Your inability to perform well in a mathematics class becomes a self-fulfilling prophecy.

If, instead, you have a growth mindset, you believe that skills and knowledge are the result of paying attention, trying and failing and learning and generally working hard. With this mindset, you are always trying hard and seeking to learn new things even when they seem very difficult, because you believe in the light at the end of the tunnel. You don’t see anything holding you back except your willingness to work.

Put differently, the person with a fixed mindset believes intelligence is more or less fixed. You’ll do better academically if you work hard, but your “ceiling” is determined by how naturally intelligent you are. If you want that really high grade or test score, it will either be impossible for you, or you’ll have to work unrealistically hard. The person with a growth mindset believes intelligence grows with perseverance and effort, much like a muscle gets bigger with effort. So, they are more likely to pay attention, try their best, and work hard. As a result, they  tend to see more positive academic results.

Finally,  Dweck discusses how you (or your kids) might naturally have a more fixed or a more growth oriented mindset when it comes to different topics or subjects: school, your personality,  etc. She stresses though, that there are ways to communicate and think that can help you adopt a more growth oriented mindset over time, like praising effort instead of results. For example, when your child does well on a test, by saying "you're so smart" you may unwittingly be implying that the performance was just the result of his innate intelligence. Instead, what you want to say is "you must have worked very hard to get such a high score!" This teaches the importance of effort and the role effort plays in generating positive academic results.

For more information about the growth mindset, you can visit mindsetworks, the company founded by Dr. Dweck to implement mindset training in schools and businesses. Alternatively, Dr. Dweck has a substantial amount of information on her personal web-site, https://mindsetonline.com/. You can also buy the book here.

We also encourage you to visit our book recommendations page where we list some other books to help you improve your academic performance.